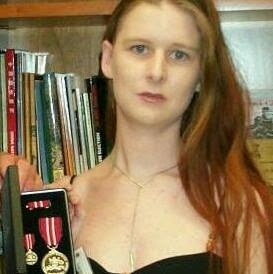 With us today is Talamasca. We’re happy to have her insight and look forward to her answers.

My name is Talamasca, I live with a army veteran, and have been writing all my life. Recently we lost everything in a house fire so I am up to my ears trying to recover my resume and tear sheets. Not to mention rewrite items I can remember which isn’t much and recover copies of what has been published. I am also a photographer and shoot the cover for, and some interior shots, for the Australian equine welfare book, They Shoot Horses Don’t They? By Jane Duckworth. The best place to check out my writing is http://www.fanstory.com/talahorse

2. How do you choose names for your characters?

Prior to the fire I’d use baby naming books, occasionally, characters like Charlie Dawson, from the military thriller I am working on at the moment just happen, it ends up being a combo of a friend’s name, or a name that matches their initials as a nod to them.

3. Do you talk about your book/characters as though they are real?

Of course. It makes it simpler to create their world if you are able to step into and engage in it.

4. Do you listen to music when you write or edit? What kind?

My music taste is pretty wide, in my old studio you could easily find black sabbath next to bob segar, I always have music on no matter what I am doing, right now I’m listening to alot of comfort music. Queen, Garth Brooks, Bob Dylan, Bob segar, The Commitments, and heaps of other stuff, anything really that is tied to a physical memory, so I can pull it to the front of my mind and remind myself that although the fire took alot, took mementos of my life, I can still access those memories, as for writing, sometimes I try to create a soundtrack for a project so that the written word will carry the vibe of that music.

5. How long have you been writing?

For over 20 years, everything from prize winning poetry with The final Realization, about a pair of friends where one deciedes she’d rather pull the life support on someone she’d previously considered her friend than continue to put up with his manipulation, to newspaper articles and my novels. I have also released a non fiction series of equine care books.

6. Tell us about when you realized you were ‘meant to be’ a writer?

I didn’t have that duh moment, when I started working with horses on a professional level we needed PR and other things, I had previously worked PR in the music industry and still had all my contacts…I grew into it, more than realized it. Ideas that won’t leave me alone till there on paper left me little choice.

I’d like to be able to say yes but its been a long time since a individual has influenced my work. I use to have a writing partner for some projects and I would write part of or the first story in a set and he the next and it would go back and forth, he died a while back from a heart attack, I certainly miss the interaction involved with working with another writer.

8. How do you improve as a writer? (Workshops, conferences, reading)

As a writer of course I am always reading, not only my own genre, everything. One of my educational institutions that I attended was Charles Sturt University so of course I am a member of their writing centre, Wagga Wagga Writers Writers. No my typing doesnt have a stutter, they love it so much they named it twice!

My downfall. Pre fire I didn’t like putting anything online till it had been published, I’d had some bad copyright experiences. Now however having lost all previous work I wish I had ignored myself an utilized stes like http://www.fanstory.com more, they allow you to publish, get feedback but most vitally youcan through the site obtain a registration code for your work.

10. Tell us about your current work-in-progress?

I’m currently trying to put back together the last item I was working on before the fire, working title is simply C.D 3.8, and it is a military thriller based in Australia and our top end, I don’t want to give too much a way but a group of private contractors that are ex-service are recalled so if they fail the govt. Has plausible deniability in regards to the team who are trying to prevent an attack from another nearby country.

11. What book are you reading now?

PIXIE by Andrea Mohr and Sail by James Patterson. I try to stay away from reading what I am writing in until the project is finished.

12. What genre do you write in? What about PoV?

I don’t stick to one genre and mostly I write in first person, but not always.

I don’t do alot of prep, for a romance book for example I can just sit and write, however something like a military thriller requires alot of research before you even think prep though I tend to do a full brief without it and then go back and do secular research for that section. An example of this would be the os raid by a SASR unit in my current book, my own history and experience provided enough intel to write the initial chapter but things like weapons were 20yrs out of date for a story that was happening now, so I wrote it then went to research current weaponary and plucked and changed those areas.

14. Do you know how your stories will end?

Sometimes a vague idea but I try not to lock myself in.

15. Do you books have a message or theme? Or are they purely for entertainment?

I write firstly to entertain me, so short of my non fiction work, I hope entertainment.

16. Do you have any favorite snacks or drinks that you eat/drink while writing?

I’m lucky if I remember to eat!

17. Tell us about your other passions?

Working with the introduction of PZP for the fertility treatment of feral horses in Australia.

18. What’s something interesting about you?

Honestly, I’m not sure?

19. Share a small sample(limit to one paragraph, please) of your writing… can be a WIP or already published.

“So anyway, what’s on the books for today?” asked Malcolm’s.
“Rebecca Ryan’s kids need to be covered while she is in the studio at Brookvale, we have instructions to take them to the zoo” he indicated to the chairs in the conference room “take a seat guys and we’ll get down to the briefing”
As everyone on today’s team took a seat, Sascha began outlining the job. “Although the threats are against her she will have fulltime people at the studio…what she is looking for is someone, in fact two guys to entertain and look after the kids while she is working since as a general rule of thumb she doesn’t work of a weekend”

“So why now” Steven jumped in.

“Another words, shit or get off the pot”

“In this case a million dollar pot” put in Malcolm’s.

“that’s it mate, anyway apparently the troublesome twosome have their sights set on Taronga zoo, groans came from all around the room, “hey we should be thankful they didn’t insist on Luna Park or Western Plains zoo, anyway they want to see the snow leopard and having being Adrians parent units old mascot we were with him on the team able to pull some strings to get them into the enclosure with the animal.

“Nice to see I have my uses” I mumbled.

“It’s a logistical nightmare, there will be civilians everywhere”

20. Anything you’d like to say to your current and future readers?

Thanks so much, Talamasca, and good luck to you.
E&M